Melvin Jones was born in Cleveland, Ohio on May 5, 1926 to Charles and Marjorie (Saunders) Jones.  His parents had been married in Mississippi and moved around between Chicago, Cleveland, and Detroit.  Melvin was the third of eight children.

In a letter from Marjorie’s mother, Emma Saunders, dated December 15, 1929 from Vicksburg, Mississippi, Emma says, “Your uncle Clarence and my cousin Joe Reed has killed a many cat.  Your papa says all boys will kill cats.”  Emma then tells a story about what her sister Grace once did to a cat.  She concludes that section with, “So I guess that is where Melvin got killing cats.”  Yikes!  What kind of boy kills cats at the age of 3? 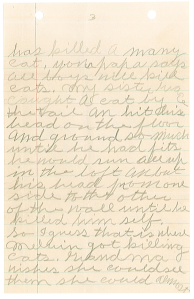 Anyway, in 1930, the family, including Charles, Marjorie, little Marjorie, Melvin, Earl and Gwendolyn lived on Milford Avenue in Detroit and Charles was a real estate agent.  In the 1940 census, the family lived in Chicago on South Park Avenue.  Four more children had been born to Charles and Marjorie (Donald, Adelbert, Jacquelyn, and Vaughan).

Melvin married and had a daughter.  He and his wife divorced.  Melvin and my Aunt Sally Wilson married on July 4, 1960.  Sally kept the marriage hidden from her family until after my parents’ own wedding on July 16, 1960, in which Sally was the maid of honor (see page header; Sally is to the right of the bride, my mother Mary).

Uncle Melvin worked at the Chrysler Tank Plant in Detroit and was very active in the UAW Region 1B.  He and Aunt Sally took many trips to the conventions around the country.