Today I’d like to discuss the last surviving child of John and Mary Wilson, my grandfather’s brother Stu.  He lived to the age of 98! 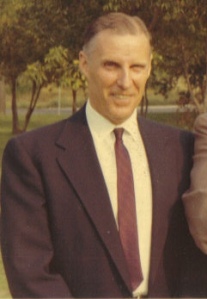 Stu was the 9th of 10 children born to John Wilson and Mary Thompson.  He was born in Pittsburgh Township (now Kingston), Ontario on April 21, 1914. In the 1921 Canadian census, Stu is living on the Wilson farm in Pittsburgh Township with his parents, his paternal grandmother, and 7 brothers and sisters.  The oldest son, Hugh, had moved out.  The oldest daughter, Annie Maude, had died at the age of 4 in 1904.

Stu crossed the border at Buffalo, N.Y. on April 26, 1948 in order to reside in the United States. He lists my grandfather, Charles, as his contact in the U.S. At the time, Stu was a machinist living in Toronto. 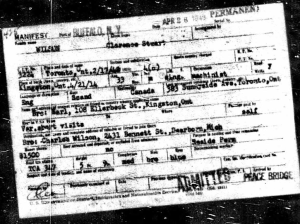 His Declaration of Intention for U.S. citizenship is dated March 18, 1949 in Houston, Texas. Stu married Willa Mary Craig (Aunt Mary) on July 30, 1949 (I’m assuming in Canada). On October 18, 1949, his new wife Mary came through Port Huron, Michigan on her way to her husband’s residence in Houston.  Within the next few years, they had a son. By 1952, the Wilson family was living in Flint, Michigan where, according to the city directory, Stu was a machinist at Buick.

This is all I know about Uncle Stu from the documents.  I know they moved to Ottawa, but I’m not sure when.  I remember them coming from Canada to visit my grandparents in the 1980s.

Today is the third anniversary of Uncle Stu’s death. His obituary from The Ottawa Citizen of Jan. 9, 2013 reads as follows:

WILSON, Clarence Stuart (longtime resident Fraser Ave.) Passed away in Ottawa on January 7, 2013. Born April 21, 1914 in Pittsburg Township (Kingston), Stuart was the surviving member of his family of 10 brothers and sisters. He is predeceased by his beloved wife Mary (nee Craig of Tamworth/Kingston) and survived by his son, Gordon, daughter-in-law, Joanne, and grandsons, Mark and Jeff. Stuart lived a long and wonderful life, characterized by a positive attitude, quick wit and concern for others. He will be missed by all who knew him. Thanks to all who have assisted Stuart in various ways over the past few years. There are no words to adequately express our gratitude to Chris and Astrid whose capacity for caring made such an immense difference in the quality of Stuart’s later life. A private family service will be held. Online condolences can be made at http://www.colefuneralservices.com.