I found another interesting tidbit of history from my mom’s side of the family. My 1st cousin 5x removed, Orator Francis Woodward bought the Jello-O name and business from a neighbor for $450 in 1899! Though not the inventor of the product, he began producing Jell-O through his Genesee Pure Foods Company.

Back to the beginning though. Orator F. Woodward was the son of Abner T. Woodward and Phebe Lyman. Phebe was the sister of my 4x great-grandfather Levi Lyman. Levi’s daughter Mary married Andrew L. Moore, one of the Moore boys that moved west from New York in the 1860s.

In the 1870s, he began inventing and manufacturing vaious remedies. In 1895 in LeRoy, Pearle B. Wait and his wife May created “Jell-O” by adding fruit syrups to gelatin. In 1899, he sold the formula and name to Orator for $450. He built up the business through very popular advertising campaigns. Unfortunately, Orator died on January 21, 1906. He had suffered a stroke the year before and, weeks before his death, had gone to Hot Springs, Arkansas for his health. His wife Cora became president of the Genesee Pure Foods Company. Their son Ernest succeeded her. Ernest had married Edith Hartwell in 1903. They had one son named Talmage Woodward.

There are lots of newspaper articles out there detailing the exploits of the Woodward family and the Jell-O company. In 2018, Allie Rowbottom published a memoir of her family titled Jell-O Girls: A Family History. Allie’s great-grandmother was Edith Hartwell’s sister. 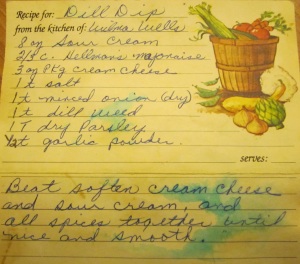 This Thanksgiving week, I’m thankful for my Aunt Wilma’s yummy dill dip recipe. I love it with veggies or pretzels!

Mix apple slices, cinnamon and nutmeg together.  Let stand 15-20 minutes.  Pour in pie crust [I guess we’re on our own on how to make the crust!] and put pats of margarine on top.  Put slits in top crust.  Bake on 425 for 20 minutes then turn down to 350 for 40 minutes.  Make sure to put the pie on a cookie sheet, so the juices won’t spill in oven. 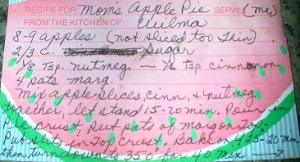