Another Randy Seaver/Genea-musings exercise! “Thinking about your direct ancestors back through 2nd great-grandparents – in other words, ancestors #2 to #31 on your pedigree chart – how many children did they have? How many lived long enough to marry? How many died before age 10?” So here’s mine:

The theme for Week 45 is “Rich Man.” Amy’s suggestion of “Any Moneypennys or Banks in the family tree?” made me look for that surname in my tree. Surprisingly, I found some Moneypennys. My 2nd cousin 2x removed Viola Dilsaver married Charles Moneypenny in 1931 in Ohio. Viola was the daughter of Laura Belle Culver (1880-1940) and James Dilsaver. Laura was the daughter of Sarah Ellen Bost (1860-1939), my 3rd great-aunt, and Alfred Culver. Sarah Ellen was the sister of my great-great grandfather William S. Bost (1859-1932).

Anyway, back to the Moneypennys. They lived in Summit County, Ohio, and divorced in August 1944. Viola and Charles had 2 sons, David and Jack. Viola married Henry Wilson on October 25, 1947. On their marriage license, they were both listed as rubberworkers. Viola died in 1992 at the age of 78. Her son David had died in 1964 in a plane crash at the age of 31. Charles Moneypenny died in 1998.

For Week 40 of #52Ancestors, the theme is “Harvest.” I decided to look and see how many of my great-great grandfathers (you have 8) were listed in the 1880 U.S. Federal Census/1881 Canadian Census with an occupation of “Farmer.”  Here we go:

In 1940, Clara was living with her daughter Thelma and her husband in Napoleon. Clara is listed as married, but Roy is not living with her and I have been unable to find where he is in the 1940 census. Roy died April 4, 1949 in Henry County and Clara died March 23, 1950. They are buried in Forest Hill Cemetery.

Minnie Belle married Julian Sylvester Bost (my 1st cousin 4x removed) on September 6, 1899 in Henry County. Julian had been previously marred to Celia McKellips on Dec. 14, 1896. They had a son Charles on Feb. 14, 1897. Celia died the next day from childbirth complications. She was only 16 years old. In the 1900 census on June 7th, Julian, Minnie, and Charles were living in Hamler, and Julian was a teamster. Julian and Minnie had a son, John Perry, on October 4, 1900. I think that Julian and Minnie divorced sometime in 1906, since Minnie married another 1st cousin 4x removed of mine, Asa Wilford Bost, on January 19, 1907.

Julian also remarried on July 15, 1907 to a woman named Cordelia. In 1910, Asa, Minnie, and John Perry were living in Napoleon, Ohio where Asa was a laborer on odd jobs. In the 1916 Farmers’ Directory, the family was living at 615 E. Washington St. in Napoleon and Asa was listed as a blacksmith. In 1920, Asa and Minnie were living on N. Perry St. in Napoleon and Asa was a blacksmith. In 1922, Minnie’s son John P. Bost married Gladys King and they had a son named John Wilfred Bost in August 1923. In the 1930 census on April 7th, John P., Gladys, and John W. were living in Toledo. In the 1930 census on April 8th, John W. was listed as living with his grandparents Asa and Minnie in Napoleon. In the 1940 census, Asa, Minnie, and John W. were still living in Napoleon where John W. was attending high school. Asa died May 21, 1941 in Toledo. John W. Bost, Minnie’s grandson, enlisted in WWII while still in high school on January 20, 1942. He became a corporal in Co. B. 1st Div. 7th Marines and was killed on New Britain in the South Pacific on January 7, 1944. He is buried with his parents in Forest Hill Cemetery. Minnie died September 7, 1945.

I saw this idea from Amy’s review of Week 25: “Debi shared the earliest photos of various ancestors. (I like how she broke them down by maternal and paternal sides).” So I’m going to give it a try!

In my research, I’m always saddened when I come upon a mother who died young. One example is my great-grand aunt Clara Bost. She was the youngest sister of my great-grandmother Florence. Clara was only 5 years old when her own mother, Mary McCracken Bost, died in 1911.

Clara was born in New Bavaria, Henry, Ohio on September 7, 1905. She married Bert Turner on January 21, 1922 in Wauseon, Fulton, Ohio. They had 2 children born in Ohio (Lucille, born 1923 and Robert, born 1925). Their son Raymond was born in Lincoln Park, Michigan in 1928 and their daughter Betty was born there as well on December 2, 1932. In 1929, Bert and Clara were living at 1323 Victoria Avenue in Lincoln Park, and Bert was employed as a Checker at Timken Detroit Axle Co. (the same place my grandfather Edward Wells worked). The 1930 census has them living at the same place.

Sadly, Clara died on December 13, 1932 at Wyandotte General Hospital of puerperal septicemia from the birth of her daughter Betty eleven days earlier. She was only 27 years old. She is buried in Wauseon Union Cemetery.

Her husband Bert remarried to Nellie LeBlanc a few years later and had at least one son with her.

I don’t have a ton of unusual names in my family tree – the ones that are unusual are usually biblical. My great-great-great grandfather Adam Bost had four brothers: Azariah, Abraham, Michael, and Samuel.

Azariah Bost was born in about 1830, the first son of Samuel Bost and Sarah Kinder. Azariah and Hannah Long were married in April 1857 in Henry County, Ohio. Their son Joseph was born in July 1858. In 1860, the little family was living in Harrison, Henry County, Ohio. Azariah was 30, Hannah was 19, and Joseph was 2. Azariah enlisted in Company A, Ohio 68th Infantry Regiment in October 1861. on 17 Oct 1861. Azariah died of disease on March 22, 1862 and is buried in the Shiloh National Cemetery.

“On March 15, 1862, the 68th Ohio marched to Metal Landing, Tennessee and then traveled by steamer to Pittsburg Landing, Tennessee. At this new location, the regiment’s members experienced severe illness, depleting the organization’s ranks from approximately one thousand men to 250 soldiers available for duty. The 68th did not engage Confederate forces at the Battle of Shiloh on April 6 and April 7, 1862, being ordered to stay in the rear guarding supply and ordinance trains.”

All 5 sons served in the Civil War.  Azariah enlisted in Company A, Ohio 68th Infantry Regiment in October 1861. He died at Shiloh on 26 March 1862 and is buried at the cemetery there. 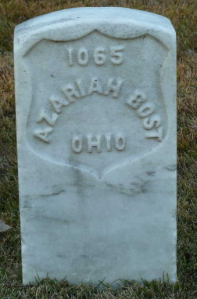 One ancestor that I have that was enumerated on a non-population census (in this case, the 1890 Union veterans census) was my great-great-great grandfather Adam Bost. In 1890 he was living in Marion Township, Henry County, Ohio. Below is his snippet from the schedule. He was drafted to Company B, Ohio 38th Infantry Regiment on October 9, 1862 and mustered out on July 27, 1863 at Winchester, Tenn.

An ancestor I feel like I’ve only been able to halfway research is my great-great grandmother, Mary Elizabeth McCracken. I just can’t figure out who her parents are. I’ve started trying to delve into my father’s AncestryDNA matches to see if I can find some clues.

According to her death certificate, Mary was born on August 23, 1862 in Ohio and her father’s last name was “McRacken.” On March 7, 1880, she and William Bost were married in Henry County, Ohio. On June 5, 1880, they were enumerated in the census living in Marion Township, Henry County, Ohio. A half-page away on the census is a man named E. McCracken who was born in 1835. This might be a lead.

Between 1882 and 1905, the William and Mary had 7 children: Mary Ellen, Francis, Marion Sylvester, Adam, Florence Elizabeth, Emma Jane, and Clara Arnetta. Mary died March 8, 1911 in Marion of pneumonia. Her youngest daughter was only 5 years old.