The title of this post comes from an article in the Christmas Eve 1889 edition of the Bay City (MI) Times. I’ll be writing about Emma Baker, the sister of Jacob Baker (my husband’s great-great grandfather). Emma was born to George and Elisabeth (Kline) Becker on January 13, 1869 in Ohio. She was the 7th of 9 children. In the 1870 and 1880 censuses, the family was living in Richfield Township in Lucas County, Ohio. Emma’s older brother Conrad (1860-1933) married Mary Hager in Bay City, Michigan in October 1884 and remained in that area. Jacob joined Conrad in Bay City sometime between 1884 and 1889.

Jacob became ill with “typhoid-malarial fever” and Emma came up from Ohio around the beginning of October 1889 to care for him – I assume since he was single and didn’t have anyone else to tend to him. According to the Bay City Times article, “For nine weeks [Emma] attended carefully to his wants, remaining at his bedside day and night, and sacrificing her health and rest for his good.” Around December 13, 1889, Emma too got sick. While she was ill, their brother Conrad also came down with the sickness and was moved to a different house (I assume since he had a pregnant wife and young son at home). Emma died on December 23, 1889 at about 10:30 AM.

Emma was buried in plot 1264 in Bay City’s Pine Ridge Cemetery on December 24, 1889 at 2 PM. Jacob and Conrad recovered from their illnesses. Jacob was back in Ohio by 1900 where he married Bertha Knisel. He and his wife named their first child Emma Maud Baker, a touching tribute to his sister who nursed him, or as the article said, “She lays down her own life that her brother may live.”

Recently, my mother-in-law gave me a 19th-century album full of family portraits. She knew the portraits were of relatives from her father’s side of the family, but none of them were identified. Luckily, I recognized one of the photos from Ancestry.com. It was of my husband’s 3rd great-grandmother Elisabeth (Kline) Becker/Baker and her sisters Catherine (Kline) Hartman and Dorothea (Kline) Eberhart.

Most of the portraits were from photographers in Owosso and Bay City, Michigan, Toledo, Ohio, and Danville, Illinois. In examining the Kline family, who came to the U.S. in around 1854, Elisabeth and Dorothea’s families lived in Danville, Illinois in 1860, and while Dorothea stayed in Illinois, Elisabeth’s families re-located back to northwest Ohio, where Catherine’s family had stayed. Meanwhile, other Kline siblings Frederick, Wilhelmina, Conrad, and John Nicholas moved to Bennington, Shiawassee County, Michigan.

While I had a general idea of the possible identities of the portraits, I thought finding out when the photographers were in business would help me date the images and (maybe) further narrow down the identities.

The Clements Library at University of Michigan hosts the online edition of the Directory of Early Michigan Photographers by David V. Tinder. This resource was incredible helpful – arranged by city (including different address changes) and also by photographer. Here are the photographers contained in my mother-in-law’s collection:

I wasn’t able to find a source for Illinois photographers as good as Michigan’s, but I did find a website that mentioned “Early Danville Photographers.”

I do have one photograph by Hutchinson of 110 Jackson St., Elkhart, Indiana but I haven’t been able to find any information on this one.

The theme for Week 45 is “Rich Man.” Amy’s suggestion of “Any Moneypennys or Banks in the family tree?” made me look for that surname in my tree. Surprisingly, I found some Moneypennys. My 2nd cousin 2x removed Viola Dilsaver married Charles Moneypenny in 1931 in Ohio. Viola was the daughter of Laura Belle Culver (1880-1940) and James Dilsaver. Laura was the daughter of Sarah Ellen Bost (1860-1939), my 3rd great-aunt, and Alfred Culver. Sarah Ellen was the sister of my great-great grandfather William S. Bost (1859-1932).

Anyway, back to the Moneypennys. They lived in Summit County, Ohio, and divorced in August 1944. Viola and Charles had 2 sons, David and Jack. Viola married Henry Wilson on October 25, 1947. On their marriage license, they were both listed as rubberworkers. Viola died in 1992 at the age of 78. Her son David had died in 1964 in a plane crash at the age of 31. Charles Moneypenny died in 1998.

In 1940, Clara was living with her daughter Thelma and her husband in Napoleon. Clara is listed as married, but Roy is not living with her and I have been unable to find where he is in the 1940 census. Roy died April 4, 1949 in Henry County and Clara died March 23, 1950. They are buried in Forest Hill Cemetery.

Minnie Belle married Julian Sylvester Bost (my 1st cousin 4x removed) on September 6, 1899 in Henry County. Julian had been previously marred to Celia McKellips on Dec. 14, 1896. They had a son Charles on Feb. 14, 1897. Celia died the next day from childbirth complications. She was only 16 years old. In the 1900 census on June 7th, Julian, Minnie, and Charles were living in Hamler, and Julian was a teamster. Julian and Minnie had a son, John Perry, on October 4, 1900. I think that Julian and Minnie divorced sometime in 1906, since Minnie married another 1st cousin 4x removed of mine, Asa Wilford Bost, on January 19, 1907.

Julian also remarried on July 15, 1907 to a woman named Cordelia. In 1910, Asa, Minnie, and John Perry were living in Napoleon, Ohio where Asa was a laborer on odd jobs. In the 1916 Farmers’ Directory, the family was living at 615 E. Washington St. in Napoleon and Asa was listed as a blacksmith. In 1920, Asa and Minnie were living on N. Perry St. in Napoleon and Asa was a blacksmith. In 1922, Minnie’s son John P. Bost married Gladys King and they had a son named John Wilfred Bost in August 1923. In the 1930 census on April 7th, John P., Gladys, and John W. were living in Toledo. In the 1930 census on April 8th, John W. was listed as living with his grandparents Asa and Minnie in Napoleon. In the 1940 census, Asa, Minnie, and John W. were still living in Napoleon where John W. was attending high school. Asa died May 21, 1941 in Toledo. John W. Bost, Minnie’s grandson, enlisted in WWII while still in high school on January 20, 1942. He became a corporal in Co. B. 1st Div. 7th Marines and was killed on New Britain in the South Pacific on January 7, 1944. He is buried with his parents in Forest Hill Cemetery. Minnie died September 7, 1945.

The thing about family history that is challenging is the overwhelming focus on the male side of things – surnames, lines of descent, etc. This means (at least for me) that I know very little about even some pretty recent female ancestors.

One example is Polly Ann Farr, my third great-grandmother. She was the 3rd wife of Thomas Belknap (born in 1803), and the mother of Arthur Belknap. She was born in about 1832. The earliest record I have found for her is an application for a marriage license, dated September 18, 1848 to Thomas Belknap in Lorain County, Ohio. I’m not sure if this means they were married on that date or not. The application states that “she is of eighteen years.” I don’t think that’s true though.

The next record is the 1850 U.S. Federal Census for Russia Township in Lorain County. Polly Ann was listed as age 18 and birthplace of Ohio. Thomas’ 11-year-old son Francis is also living with them. In 1860, the family was living in Clinton, Fulton County, Ohio. Polly was listed as 29 and born in Ohio. They had 4 children in addition to Francis by 1860. In 1870, they were living in York Township, Fulton, Ohio and Polly was listed as 38. Now they had 6 children in addition to Francis. In 1880, the last census she is found in, the family was living in Dover Township, Fulton, Ohio. She was listed as 49, born in Ohio. Polly’s father was listed as born in Vermont, while her mother was born in Kentucky. Only three of their children were living with them in 1880.

Through DNA, I think Polly Ann’s father may have been Kimball Farr, but I have to do a lot more research to prove it!

For this week’s “At the Cemetery” prompt, I’m going to take a look at Tedrow Cemetery in Dover Township, Fulton County, Ohio. A lot of Belknap’s are buried there, including Thomas Belknap, our ancestor that originally left New England and came to Ohio to continue our branch of the Belknap tree.

Tedrow Cemetery is located on the north side of County Road J, just east of the village of Tedrow. The cemetery has also been known as Spring Hill Cemetery and Eldredge Cemetery. 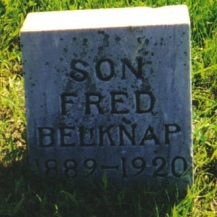 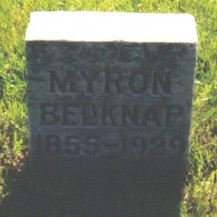 Only 3 of Thomas’ children are not buried in Tedrow: Francis M., Thomas J., and Arthur.

A very helpful transcription for Tedrow Cemetery can be found here: http://www.crewfamily.com/tombstones/volume_1_page_112.htm.

For this prompt, I though I would include some pictures of a couple of farmers from both sides of my family, caught in the act of farming.

In my research, I’m always saddened when I come upon a mother who died young. One example is my great-grand aunt Clara Bost. She was the youngest sister of my great-grandmother Florence. Clara was only 5 years old when her own mother, Mary McCracken Bost, died in 1911.

Clara was born in New Bavaria, Henry, Ohio on September 7, 1905. She married Bert Turner on January 21, 1922 in Wauseon, Fulton, Ohio. They had 2 children born in Ohio (Lucille, born 1923 and Robert, born 1925). Their son Raymond was born in Lincoln Park, Michigan in 1928 and their daughter Betty was born there as well on December 2, 1932. In 1929, Bert and Clara were living at 1323 Victoria Avenue in Lincoln Park, and Bert was employed as a Checker at Timken Detroit Axle Co. (the same place my grandfather Edward Wells worked). The 1930 census has them living at the same place.

Sadly, Clara died on December 13, 1932 at Wyandotte General Hospital of puerperal septicemia from the birth of her daughter Betty eleven days earlier. She was only 27 years old. She is buried in Wauseon Union Cemetery.

Her husband Bert remarried to Nellie LeBlanc a few years later and had at least one son with her.

Most of my brick walls are mothers that have died early. One example is my great-great-great grandmother Margaret Rhost’s mother. I don’t even know her name. I do know Margaret’s father, Conrad Rhost, was born in 1825 in Switzerland. He and his unknown wife had a son named John in about 1847 in Switzerland and Margaret was born in June 1848. The family came to the United States between 1850 and 1853 (year of immigration varies on the 1910 and 1920 censuses).

Conrad married Mary Gertrude Ginder in Fulton County, Ohio on October 9, 1855. They had 8 children between 1856 and 1873 in Ohio. In the 1860 census and beyond, it looks like John and Margaret are Gertrude’s children.

I’m not sure if Margaret’s mother died in Switzerland before 1850, on the journey over, or soon after arrival. She is a true brick wall! 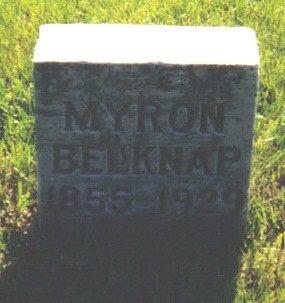 On June 24, 1860, he was enumerated with his family in Clinton, Fulton County, Ohio. He was 5 years old.  On June 4, 1870, the family was living in York, Fulton, Ohio. Myron was 14 years old, did not go to school, and could not write. In this census, my great-great grandfather Arthur was 1 year old. On June 18, 1880, Myron was still living at home in Dover Township, Fulton, Ohio with his parents and siblings Lucina and Arthur. He could not read or write and was a laborer.

By 1900, both Thomas and Polly had died. I think Myron took over the farm in Dover Township. His sister Alice and her husband David Shaffer lived nearby with their son Ernest. On April 15, 1910, Myron was still living alone on the farm in Dover Township and was 55 years old. In January 1920, at 65, Myron was still farming in Dover. His farm was described as a truck farm, which is “a farm that produces vegetables for the market.”

Myron Belknap died August 17, 1929 in Dover Township of a cerebral hemorrage. The informant on the death certificate was his nephew Ernest Shaffer. He was buried in Tedrow Cemetery in Tedrow, Fulton County, Ohio with many of his relatives, including his parents, his brother Zera, and his sister Lucina.